We met again, and again, and again. There were coffees, lunches, and hikes that all seemed to flow more smoothly than the last. He seemed confident in what he was looking for in a woman, and I could tell by the look in his eyes that I held all of the qualities he had been searching for. It takes a uniquely special man not to be intimidated by a fiercely independent and strong willed woman like myself. If you throw the widow part into the equation, it takes an even more unique individual. Death is not requested, nor in my case was it expected, and my heart did not stop loving my husband on the day he died. My heart and soul will forever love my husband more deeply than I can put into words, but there I was looking at a man who didn’t seem to fear my past and appeared to want to apply for a spot in my future.

His eyes were captivating, and each time we’d meet I’d find myself getting lost in his soft and welcoming glare. He made me laugh in the most understated and intelligent way. I’d laugh at his texts; I’d laugh when we spoke on the phone, I’d laugh when he said things that seemed to confuse innocent bystanders not familiar with his wit or dry humor. Laughing had become so profoundly important to me post loss. Life is painfully short, and my loss had taught me so much about what I was looking for in my future – laughter topped my list. He told me it had been years since he had been this funny, that for a time in his life he has lost his humor and his zest for happiness. It seems we both hit a rough patch in our lives at parallel times. As we continued to peel back the onion of our collective lives, we discovered that our painful life lessons were uniquely the same but learned in very different ways. My lessons were learned through death and loss while his lessons were learned from divorce and loss. As a widow, I never related to loss through divorce until I sat across from a man that intrigued so uniquely.

He was a gentleman above all else. Date after date and he held my door, pulled out my chair, and did nothing more than give me a hug at the conclusion of each meeting. After 8 or 9 of these encounters I started to wonder, will he try to kiss me? I could feel the undeniable attraction between us physically from the start. Despite feeling like a schoolgirl in his presence, I was not in a rush to be kissed. It had been nearly 14 years since I had my last first kiss, and it had been almost two years since the man who gave me my last first kiss had given me HIS last. My lips seemed in a way sacred and safe, and I was not sure I was ready to cover the remnants of my husband’s touch with those of another. So far the handsome man I’d been seeing for several weeks now had made no attempts to kiss me, and that left me with a sense of longing and relief all at the same time.

He asked me to dinner and a movie, and I gladly accepted as I had several times before. He seemed quieter that night than I had seen him on our various past dates. We had an excellent dinner, and the chemistry was clearly at an all time high for us both. Lots of eye contact that held my attention and periods of silence that didn’t seem awkward or uncomfortable but rather safe and normal. We walked outside the restaurant, and he asked me if I’d like to sit by the fire for a while, and as I told him I would, he placed his hand on the small of my back. Like fire alarms going off in my head, my body and my heart were unsure how to translate this different touch. Humans need human contact. Humans crave the touch of other humans, and I found my defenses lowering as his touch was welcomed after going so long without any human contact. The emotions of a widow are complex and complicated. Acutely aware that death has forever changed the course of our future, but still holding on to the life we had lived with our beloved. As a widow, I was walking that parallel line between a new life and the end of an old chapter. Enjoying this man’s company, enjoying his hand on my back, and feeling safe in his gaze was both exhilarating and terrifying all at the very same time.

We sat by the fire on a cool spring night. People hurried by on their way to dinner or a movie, and as I sat by his side, they seemed to fade into the distance as background noise and a far off distraction. For the first time in a very long time, I felt like the world was made up of just me and one other human being. He placed his arm around my shoulders and looked deeply into my eyes. The words stopped, the stare became more intent, and he gently leaned in to cover up that last first kiss. My mind raced, and my heart felt as if it would beat out of my chest, but I leaned in for my next first kiss. One of the many things my last first kiss taught me is that that life should be lived, loved, and this interesting…. 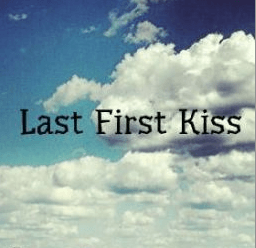